To: The House of Representatives

Thank you for being a part of this campaign. The 30,000 signature live export petition was delivered to Parliament in October 2019. Here’s a news article about the handover: https://www.newshub.co.nz/home/rural/2019/10/petition-to-ban-live-animal-exports-delivered-to-parliament.html

In June 2019, the Government launched a review into the live export of cows, sheep, goats and deer, which has yet to be finished due to COVID-19 causing delays. SAFE and many other animal organisations made detailed submissions on this review, as did thousands of supporters calling for an end to all live exports. Sadly the review ignores day-old chicks and fish, which make up 99% of animals exported. However if the review recommends a ban on cattle exports, this decision could prevent tens of thousands of cows ending up in countries with lower standards of animal welfare, transport and slaughter.

SAFE made a detailed written submission on the petition as it has been going through the Parliamentary committee process, but that process is on hold awaiting the results of the Government review. Meanwhile, SAFE continues to keep the pressure on to stop live export, with protests at the ports when ships arrive and media stories exposing this brutal trade. This campaign will continue until live export is banned for good! 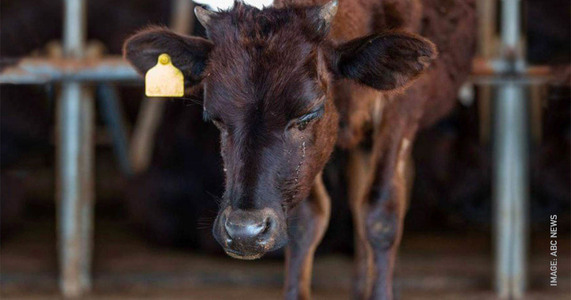 We are asking our Government to prohibit the live export of farmed animals to countries that have lower animal welfare, transport and slaughter standards than New Zealand.

In New Zealand, we have standards for how we expect all animals to be treated. But when we export animals overseas, we expose them to unknown horrors. As animal lovers, we find the live export trade completely unacceptable.

In 2018, New Zealand exported 2,820,320 farmed animals alive. Day-old chicks are taken to farms that cram chickens into small cages in a way that would be illegal in New Zealand. Cows are shipped while pregnant and are often taken to concrete factory farms to give birth, where they are kept for years to be milked.

In 2003, New Zealand ended the live export of farmed animals for slaughter. However animals still regularly leave New Zealand’s boundaries and suffer many unknown fates. Once the animals are no longer commercially “useful” they are slaughtered. Most countries that New Zealand exports to do not require stunning prior to slaughter. This means that their throats are slit while they are still conscious.

SIGN the petition asking our Government to prohibit the live export of farmed animals to countries that have lower animal welfare, transport and slaughter standards than New Zealand.

WATCH to learn about the animal welfare disaster in Sri Lanka:
http://bit.ly/LiveExportVideo

By signing this petition your information will be shared with SAFE who will get in contact from time to time about this campaign and others. You are free to opt out at anytime.

SAFE will present the petition to the House of Representatives.

The Government's live export review is now open for submissions. SAFE has made it easy for you to submit. Follow the link and you can write your own submission or use a pre-filled option.
➡️ ➡️ https://safe.org.nz/take-action/share-your-thoughts-on-the-live-export-review/

SAFE will be presenting this petition to Parliament on 24 October. This date marks 16 years since the Cormo Express disaster that saw 6,000 sheep die on an Australian shipment, and led to the New Zealand Government banning the live export of animals for slaughter in 2003.
But millions of animals are still exported each year through legal loopholes. We need the Government to close the loopholes, and that is why your signature is so important.
If you're in Wellington, please join us at the handover at 12.50pm on Thursday 24 October. Click 'going' and get updates on our Facebook event ---> https://www.facebook.com/events/539914043477008/

The Government have approved a shipment of over 5,000 cows from Napier to China, despite its current live export review.
SAFE will be outside the Napier Port on Sunday (4 August) to protest this shipment. If you're in the area please join us - https://www.facebook.com/events/818237861903167/