We are excited to inform you that the Healthy Homes Guaruntee Bill has recently been passed in government. This is a positive step in the right direction, and was made possible because of the public support and attention this issue has recieved.

By signing our petition, you have shown parliament that this is an important issue that requires attention. We hope to continue advocating for this incredibly important topic in the future, and are excited of the prospects that we can achieve when we unite and advocate for the important issues.

Thank you so much for the support, 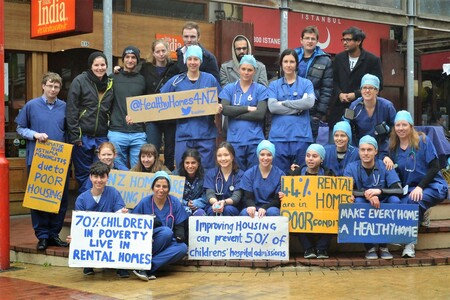 The Healthy Homes Guarantee Bill will soon be having its second reading in parliament. This bill aims to ensure that every rental home in New Zealand meets a minimum set of standards for heating and insulation. Our petition is in support of passing such legislation.

In addition to this, we wish to show the government that the public strongly believes more has to be done to ensure that our houses are warm, safe and properly insulated. This will play a significant role in reducing preventable diseases in our country, including asthma, chest infections, rheumatic fever and much more.

The home environment we live in plays a huge role in our own health, and the health of our families. Every winter in New Zealand, about 1600 deaths are attributed to people living in cold, damp homes (1). Compared to many other developed countries, New Zealand has much higher rates of people being hospitalised for lung diseases such as asthma (2). Living in cold, damp, mouldy environments places our families at much greater risk of having acute attacks. It is incredibly important that people with such illnesses are not treated just to be sent home to the environment that made them sick.

The World Health Organisation recommends that houses should be insulated so that they are at least 18°C, a minimum temperature where lung (respiratory) illnesses are less likely to occur (3). Unfortunately up to a third of New Zealand’s homes do not meet this minimum standard, with the average temperature in poorer households being 13°C (3,4). This issue is therefore impacting on the health of our poorest communities and needs to be addressed by our government.

It is also clear that insulating homes well would be much more cost-effective for the government. Programmes such as “Warm Up New Zealand” have shown that the savings associated with subsidising insulation and heaters far outweighs the costs by nearly 4 times (cost-benefit ratio of 3.9) (5). The government currently spends $5.5 billion per year on lung (respiratory) illnesses such as asthma, with much of this being preventable (6).

Without a doubt, we strongly believe the Healthy Homes Guarantee Bill (No.2) is a step in the right direction. However there is still much that needs to be done. Together, we can make a difference in ensuring that New Zealand homes are warm and insulated, to improve the health of our children and families.

Petition is successful with 1,094 signatures