To: Independent Charities Registration Board

Sensible Sentencing Trust should not have charitable status

This petition has been delivered to the Independent Charities Registration Board on 02/04/18. Updates will be made here and send via email to petition signers. You can still sign the petition to receive updates. 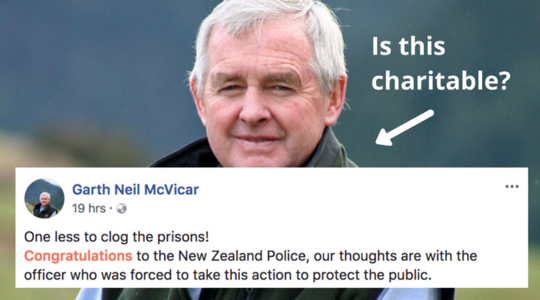 "One less to clog the prisons! Congratulations to the New Zealand Police, our thoughts are with the officer who was forced to take this action to protect the public."

McVicar founded SST in 2001 for the purpose of lobbying government for a more punitive justice system that is based more on his ideology than actual evidence. McVicar later stood as a candidate for the Conservative Party.

In 2010, SST were stripped of their charitable status because they had become a lobby group rather than a charity. The Charities Commission found that the trust "...had not provided any evidence of how ensuring stricter laws concerning violent crimes will protect human life."

To get around this, in 2015, the McVicar family set up the Sensible Sentencing Group Trust (SSGT) which is a seperate organisation that has been granted charitable trust status and all of the tax benefits that come with it. The SSGT Administrator is Anne McVicar.

Given the Independent Charities Registration Board's recent decision to deny Greenpeace charitable status because of their "independent purpose to promote its own particular views", it seems correct to independently reassess whether the activities of SSGT are in fact charitable.