To: Kris Faafoi, Minister of Immigration

Be kind to migrant workers - we need pathways to residency 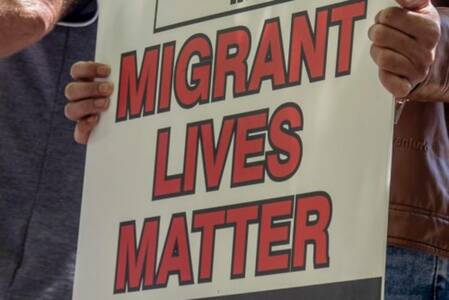 The government should support “pathways to residency” for “normally resident” migrant workers who have made New Zealand their home and deserve a place of sanctuary in today's post-Covid world.

We ask the Government to immediately:

★ Create a new Pathway to Residency temporary visa available to anyone currently on an essential skill or graduate job search visa who has been working and/or studying for five years or more.

★ Offer migrants who may have overstayed their visas pathways to residency if they have made New Zealand their home and are without criminal convictions.

★ Provide an extension of the period for low-skilled visas (from the current 6 months to 12 months or longer).

★ Postpone the stand-down requirements which are coming into force in 2021 so a review can be held on long-term policy changes needed for this sector in the post-Covid world.

New Zealand has trebled the number of workers in the country on temporary work visas over the last 15-20 years.

There are now at least 250,000 workers here on temporary work or student visas comprising around 10% of the workforce.

Entire industries now depend on these workers.

Each year, around 250,000 new temporary visas are issued to replace those leaving.

New Zealand has traditionally needed around 40,000 new permanent residents each year to replace the loss of people overseas – primarily to higher-paying jobs in Australia. As a consequence, one in four New Zealand-born Kiwis now live abroad and one in four resident Kiwis are foreign-born.

The chance of getting permanent residency is the dream that is used to entice workers and students to try their luck in New Zealand. On average around only one in five are able to do so.

New Zealand developed an export education system with promises of residency as part of this process. Today there are over 100,000 fee-paying students – making up 15% of all tertiary students who are paying between $20,000 and $50,000 a year for their undergraduate courses. Many schools in upper-class neighbourhoods have also become dependent on foreign fee-paying students.

The desperate desire of many of these students and workers to become permanent residents is being exploited by employers, educational institutions, and the government to boost their incomes.

Many work visas are also tied to particular employers. This has been a recipe for an explosion of cases of migrant exploitation. Migrant workers feel trapped whilst they are hoping to transition to permanent residency.

The situation for those who have come to New Zealand has been made worse by the fact that the government has trebled the number of migrants being given temporary visas of one kind or another whilst keeping the number being transitioned to permanent residence more or less the same. The competition for places has dramatically increased as a result.

Successive governments simply kept raising the bar to qualify by increasing the difficulty of gaining a permanent resident visa. Job categories that previously would qualify a migrant to transition to permanent residency were simply eliminated and the qualifying income and skill levels required were increased without any warning.

Over the last three years, this was made worse as the Labour-NZ First government secretly cut the number of people being given residency by 25% to around 30,000 a year. Now, even very-skilled and highly paid jobs no longer qualify for residency. It doesn't make any sense. For example, we need teachers and nurses, but they no longer qualify.

At the same time the number of temporary visas granted has continued to grow.

For employers, the ability to continually access more and more temporary workers willing to work for minimum or sub-minimum wages has also suppressed wages in these industries for all workers. There was never any incentive to raise pay, provide training needed to hire local workers, or put in the extra effort required to get young people used to a work regime.

The workers and students here on temporary visas were essentially lied to. They were promised a transition to permanent residency to entice them here, only to have the rules changed on them after they arrived. It was a terrible betrayal of trust by Immigration NZ on behalf of the New Zealand government.

We now have tens of thousands of people who have been living, working, and raising families in New Zealand for a decade or more having to renew their “essential skills” or “graduate job search” visas periodically to do so.

They are what the government has been calling “normally resident” visa holders who deserve the right to be given a pathway to residency.

Many Pacific workers who came here a decade more ago and also made New Zealand their home but may have overstayed their original visas deserve the same chance.

We have to collectively take responsibility for the terrible situation that now exists for vulnerable migrant workers living in our communities.

The Covid-19 crisis gives us a chance to fix the problem we have collectively created.

We can't replace the workers and students now here for the foreseeable future. In fact, it would be a mistake to return to the over-reliance on temporary work visa holders again in the future.

We need to create a new “pathways to residency visa” that allows the government to guarantee permanent residence to migrant workers already here once certain conditions are met. As an example, this was done for dairy farm workers in Southland on Essential Skills visas after five years service.

We can choose to use the pathways to residency visas to incentivise people to go to the industries and sectors of the economy that need them without tying them to particular employers which has been proven to lead to super-exploitation.

It makes sense to offer those workers already here pathways to residency if they desire it.

We will email the signatures

Hello Friends
Its been a while since we posted an update.
A huge thank you to all who have already signed and shared this petition.
Let's keep going and get up to 15,000 signatures.
Our team has been working diligently behind the scenes to plan our next steps and actions.
We are meeting some key people this month and will update you very soon.
Watch this space!

Kia ora Friends
Thousands signed the petition at Grey Lynn Park Festival yesterday.
We had the pleasure of being supported by veteran activist, former Green Party MP Keith Locke despite his ill health.
The PM Jacinda Ardern was also present at the Festival. Migrant Workers Association's president Anu Kaloti took this opportunity to make an appeal to the PM.

Our next event is this Saturday, 21 November, at the Grey Lynn Park Festival.
We will be at the Festival from 10am to 6pm with petition.
Let's keep moving to build support for migrant workers.

We took the petition to the Sandringham Street Festival in Auckland on Saturday 7 November.

Here are some photos from the day:

Thanks for supporting the migrant workers' campaign for pathways to residency by signing this petition.
We received huge interest in the campaign and gathered hundreds of signatures at the Sandringham Street Festival today.
Please support a little more by sharing this petition with your networks.