To: The NZ House of Representatives

No Weapons Expo, No Warships

Petition was presented to Parliament on February 14th 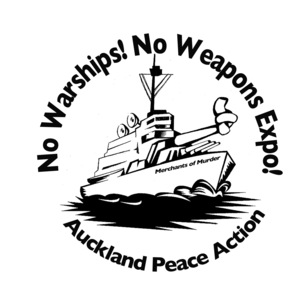 Aotearoa New Zealand is a Nuclear-Free Peacemaking nation. We oppose the investment of billions of dollars in the military and new weaponry, which clearly does not deter terrorism, but rather contributes to violence, and war cycles.[1]

We will not stand for the government supporting an arms expo for international weapons companies. This is proposed for 16 and 17 November 2016 in Auckland, sponsored by the world’s largest weapons manufacturer and maker of nuclear weapons, Lockheed Martin.[2]

In June, 2016, the government announced $20 Billion of new spending on weaponry. At the same time, it extended an invitation to a US warship to visit NZ for the first time in 32 years. In November this year, this will all culminate in a week where warships dominate Auckland Harbour, and 500+ weapons dealers take over the ANZ Viaduct events centre for a trade show. The NZDF, Ministry of Defence and NZ Trade and Enterprise provide funding, personnel, equipment, displays and expertise for the Weapons Expo.

The $20 Billion new military spending includes the purchase of new warships and aggressive cyberwarfare capabilities described by Minister Gerry Brownlee as a "significant weapon" [2] This is despite that the government's own evidence that "the country does not face a direct military threat in the foreseeable future." [3]

Auckland Peace Action is a grassroots community group working to oppose the warships and the weapons expo. We believe that it is not possible to build a peaceful and just world while simultaneously acquiring ever more weapons and doing more planning for war. This petition is an important part of our campaign this year to bring pressure on the government. Join the campaign for peace!

[2] More information on the Weapons Expo can be found at http://www.nzdia.co.nz

Our role in the world