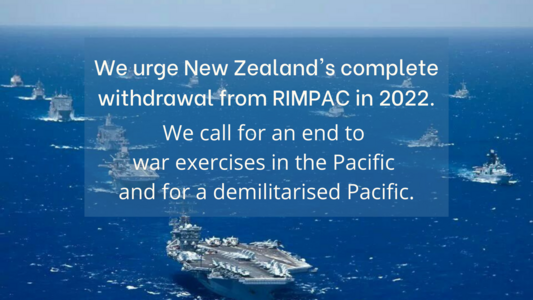 We urge New Zealand's complete withdrawal from participation in the US maritime Rim of the Pacific (RIMPAC) live combat training during July-August 2022.

RIMPAC is a live combat training maritime exercise based in and around Hawai’i that is used to demonstrate US domination and control of the Pacific Ocean. It happens every two years; it includes 20+ other nations, 25,000 troops and thousands of weapons.

Why we are opposed to RIMPAC:

RIMPAC stands in the way of a peaceful, free and independent Pacific. It perpetuates the violent colonisation of Pacific nations. It allows the vast ecological destruction of the whenua and moana by nuclear armed states to continue. It makes war more likely by showcasing military domination in the Pacific with weapons and imperial violence. It heightens the risk of the Pacific being a staging ground for conflict between the US, its RIMPAC allies, and nations not in RIMPAC, such as China.

We are living through a time of tremendous change, when ensuring a healthy and peaceful world is paramount.

Decolonisation of the Pacific:

The foundation of that peaceful and just world is built upon real decolonisation of the Pacific. We believe the Pacific should be free and independent.

RIMPAC directly stands in the way of decolonisation. It is held on occupied Indigenous land in and around Hawai'i, a place that was stolen and illegally annexed by the US to be used for sugar plantations and giant military base for Pacific operations. Many Kanaka Ma’oli, or Indigenous Hawai’ians, demand a return of their stolen lands and the rightful recognition of their legitimate authority over the islands.

Now is a time when active demilitarisation of the Pacific should be occurring and held as the standard, to create a healthy and peaceful future, where relationships between all peoples of the region flourish.

As the People’s Charter for a Nuclear Free and Independent Pacific stated in 1983, the Pacific “environment continues to be despoiled by foreign powers developing nuclear weapons for a strategy of warfare that has no winners, no liberators and imperils the survival of all humankind.”

The New Zealand armed forces will be playing “realistic” war games again alongside the armed forces of four nuclear weapons states involved in RIMPAC 2022 - Britain, France, India and the USA - despite the 1987 NZ Nuclear Free Zone, Disarmament, and Arms Control Act prohibiting New Zealanders from aiding and abetting those possessing or having control of nuclear weapons.

The devastating legacy of nuclear testing in the Pacific has caused much harm to generations of Indigenous Pasefika peoples. The nuclear powered RIMPAC war machine is unwelcome.

While communities across the Pacific work towards ecological restoration and protection of ecosystems and biodiversity, against the ravages of climate change and pollution, it is shocking and unacceptable that RIMPAC willfully adds to devastation.

During RIMPAC, deadly weapons are used on land and sea causing massive environmental destruction to the Hawaiian Islands and the Pacific Ocean. The live fire training involves shelling islands; using bombs and missiles to sink ships, leaving ammunition, debris and wreckages in the sea; and detonating underwater explosives. The US Navy is exempt from the Marine Mammal Protection Act meaning it can test underwater sonar weapons that kill and injure whales, dolphins and other species.

The US military is the world’s single largest user of oil - greater than some entire European states. These emissions are not even counted as part of the Paris agreement with all militaries exempt from counting or revealing their carbon footprint. The warships, fighter planes, troop transport, tanks and other vehicles used during RIMPAC consume vast amounts of fossil fuels, further fueling climate change and conflict.

We have a responsibility to not be part of planning for a war in the Pacific that would only see untold human and ecosystem suffering and death. We call for an end to war exercises in the Pacific and for a demilitarised Pacific.

New Zealand has the chance now to exercise independent foreign policy and be a Pacific partner and hold peace, stability, and respect for Pacific nations sovereignty by withdrawing from RIMPAC 2022. In 1982 New Zealand withdrew from RIMPAC activities. We can do it again.

Join us in demanding that that New Zealand government #CancelRIMPAC 2022 - Sign this petition.

This petition is led by the Cancel RIMPAC Aotearoa Coalition.

Via Email or Live-streamed event

Flourishing planet Our role in the world